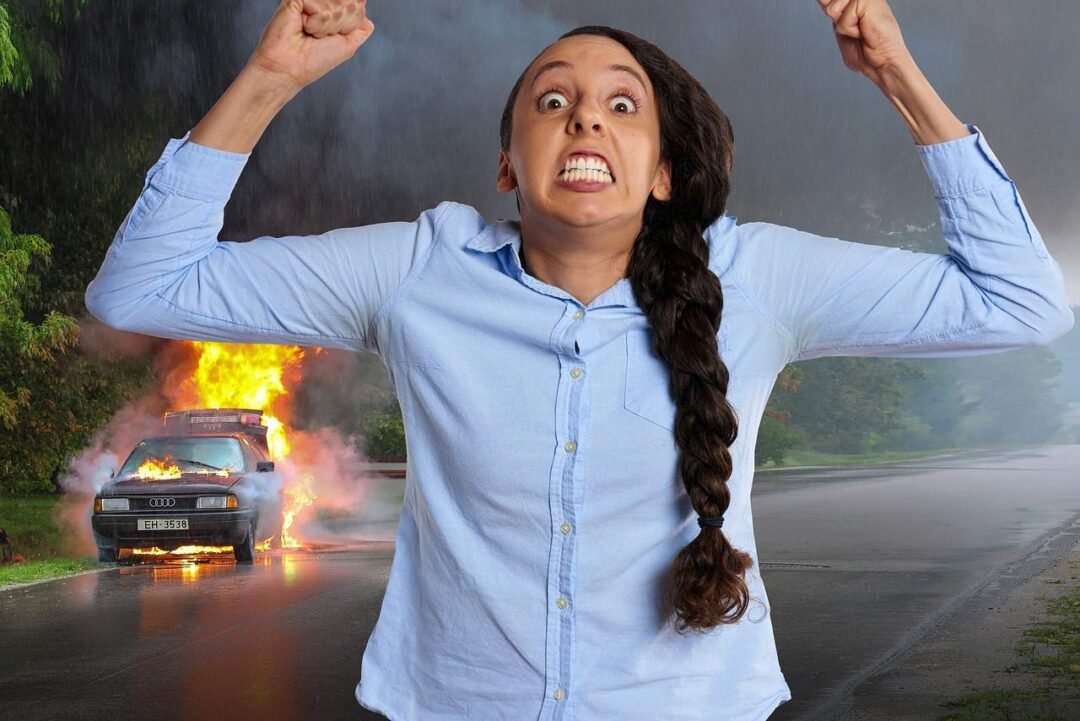 You may remember the situation when you took some decision while you are high on anger and now you regret it till today. Everyone has experienced this kind of situation once or a couple of times in their life.

Road rage is the most appropriate example we can consider to explain anger and rage. There are chances that you or the people you know could have experienced road rage, either from your side or from another side while driving on the road.

Someone overtook your car or dash your car and within a fraction of a second you just become red hot with anger, you used indecent language to yell at him or picked up a fight with him. vice versa.

But when you remember that situation today, you just wonder why the heck you overreacted for such a silly reason or how your temper becomes so high in a matter of seconds and you couldn’t hold back it. Now you either laugh at it or regret it.

Every single person can resonate with this incident.

Getting angry is not bad all the time sometimes it is fair to be angry, we call it healthy anger. Healthy anger is good because it is a part of the survival mechanism that living beings have got in the process of evolution.

Anger is one of the basic emotions required for survival. That means it is alright to get angry to save your life from dangerous situations.

If the anger is in control, it can save your life from danger or save your dignity but if it exceeds above the threshold, it will put you in trouble.

People who have anger issues need anger and rage management.

WHAT MAKES US ANGRY OR RAGEFUL:-

1. THREAT TO YOUR LIFE

When you come to know that the person or situation is a threat to your life, you instantly become angry. When our mind recognizes and assesses the threat it set our body into Flight or Fight Response.

Anger makes you feel powerful and ready to either fight with danger or run away depending upon the intensity of danger. This type of anger is good for you.

2. A THREAT TO YOUR POWER, POSITION OR DIGNITY

The emotion of anger arises from the feeling of endangerment. This means, If someone overtakes your car you feel endangered. You feel left behind in the race of greatness or like a loser. This feeling makes us angry.

When someone tries to take down your power or position, you feel endangered i.e. falling out of the race or you feel unimportant to others.

It makes you angry instantly and you try to protect it or take it back. Road rage is an example of endangerment.

In this case, if your anger is not in control then it will turn into revenge and could have not so good effects.

Digital rage is the best example to explain this. People fighting online over unimportant think just because their egos got damaged.

You will get angry when someone tries to do injustice with you or your family. I count this type of anger as good anger.

Sometimes it is important to stand against injustice to save humanity.

When you are stressed or frustrated and you don’t know how to manage it small-small situations can trigger your anger. It is the commonest cause of domestic violence.

HOW TO KNOW IF YOU HAVE ANGER ISSUE?

If you often get angry over small – small or unimportant reasons and regret it later. It is usual for you to pick a fight with friends and family members. You often indulge in road rage. Many times your anger bursts into violent form.

If this is you, you may be suffering from anger issues and need to take professional help.

PHYSIOLOGY OF ANGER AND RAGE.

Basically, it depends upon the intensity of danger. In some cases, you have to take quick action in such cases the amygdala takes over the situation and you act within a fraction of a second. The Amygdala act based on past experience and memory of past actions for similar situations. Amygdala decides whether to fight or flight.

When the danger is not that intense and you have time to think more about the situation, In such a situation the slow pathway takes over.

Impulse go to neocortex and neocortex think about it and find out the solution to tackle the situation.

So based upon the intensity of danger our body goes into flight and fight response. When we get the command to fight, the heart starts pumping blood fast, maximum blood gets pulled into larger muscles, muscles become tense, pupils get contracted, all body feel warm and body become ready to tackle the threat.

Or when we get command to flight, we avoid heading to danger and prefer to run away from the situation.

Usually, anger is strong and intense emotion. Our thinking brain temporarily lost control to the amygdala, this could be the reason why anger is uncontrollable in many instances.

People react angrily without thinking and regret it for life.

Anger is an excitatory emotion your body is in a state of excitation. If you are already angry with every following stimulus your anger goes on increasing.

At the time it becomes intense that either it burst into violence or if repressed it turns into anxiety and panic. This is why anger management becomes important.

EFFECT OF ANGER AND RAGE ON YOUR HEALTH.

Anger could turn into rage and revenge and end up violence. But if you suppress it for a longer time affect mental health it may turn into nervousness, fear, insecurities, anxiety, and panic.

It becomes difficult for you to focus on work. You could get a headache, gastric ulcer, bowel upset, eye irritation, fullness of the head, and high blood pressure. It is found out in one survey that anger will make you prone to skin disease.

There are chances that you could sever relations with your friends and well-wishers. If you are reacting angrily to even small situations, your family life may get hampered.

Your spouse will become detached from you and your children may become fearful, hypocrites and liars.

Violence and fight could hurt you or you may end up in jail.

Here are some ways with which you can manage your feeling of anger and rage,

1. DON’T REPRESS YOUR ANGER BUT DON’T USE IT.

Don’t repress your anger toward anyone but don’t use it for violence.

To express your anger toward the target person, you need not be always violent you can confront it in a little softer way.

You need to open up your feeling of anger. Don’t keep it inside and make a gas chamber of yourself.

Let the target person know what is making you angry about him so that he will think twice before doing it again.

If someone overtakes your car on the road or if someone dashes your car and ran away, instead of holding anger for him you can always restructure the situation positively.

For instance, maybe he is late for the interview/meeting and needs to reach as soon as possible. Maybe some medical emergency has happened and he needs to reach the hospital. Restructuring or reframing the situation helps to relieve anger.

3. SOME TIME IT IS WISE TO NOT GET ANGRY

If a 120KG bodybuilder bump on you or a gang of addicts messed with you, in such situations it is wise not to react angrily because you may get hurt. In such situations, you need to let it go and move on.

As per Dr. HANS SELYE, If you are already angry you can relieve it by making contact with things. Anger gets transmitted to the thing you are touching.

Dr. SELYE found that you can relieve your anger in four ways by hitting, kicking, biting, and screaming.

When people get angry over each other they fight and hit each other with hands or shout at each other. Because of hitting or shouting the anger gets relieved.

After some time, their anger is all gone maybe they forget or forgive the triggering event. and everything becomes normal.

When children get angry they shout loud and hit their legs on the ground, after some time their anger is all gone, they become normal and start playing again.

The sports that require hitting such as volleyball, table tennis, golf, baseball, basketball, football, and cricket are terrific ways to transmit anger.

That is why people who have anger issues or those who work in high-pressure environments get attracted to such games.

Biting and chewing can also relieve your stress.

Once you get angry with anything, after every following incident your anger goes on increasing.

You need to cut this link somewhere before your anger turns into violence or a gas chamber. If you think you are getting angry find distraction. Like take a break, go to the movie, go on a long drive.

It has double benefits one, the chain of anger building thoughts gets cut off and you get some time to think about it.

Compassion will always help to relieve anger. Sometimes you need to forgive others for there did and move on.

Meditation and mindful breathing can relieve your anger. Writing down your angry thoughts also helps to relieve the anger.

Nothing can replace professional help. If nothing is resonating with you go to a licensed psychiatrist, psychologist, or medical counselor.

There are several reasons one can mention that makes us angry and rageful but here are some basic and important reasons,
1. A threat to you or your family.
2. A threat to your power position or dignity.
3. Insult
4. Injustice
5. Low emotional intelligence.
If you summarise all the above reasons, fear of endangerment or fear of defeat is the end reason for anger.

What is the rage?

Rage is the expression of extreme anger. Rage may lead us to violence or revenge. May lead to frustration and anxiety if repressed.

How do I control my anger?

Here are few tips with which you can control your anger and rage,
1. Do not repress the anger but use it wisely.
2. Restructure the situation positively which makes you angry.
3. If you cant control the situation, it is wise not to get angry.
4. Gross physical impact activity.
5. Distraction.
6. mindfulness.
7. In extreme cases go for professional help.

Is the anger issue a mental illness?

Is there medication for anger issues?

There is no specific medication for anger issue but sometimes doctors may prescribe antidepressant medicine to have calming effects.
Psychological counseling is helpful in anger management.